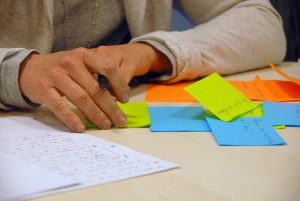 Are you overlooking an important source of ideas and connections with target publics for your PR campaign?

Try revisiting focus groups – they are popular because they can be organised quickly and don’t cost much. Results are also delivered quickly and can be analysed cheaply.

Focus groups can help you get an understanding of new or emerging issues or problems. They are also commonly used for testing: pre-testing messages for appeal and impact and as a starting point for designing broader survey instruments including questionnaires.

As an investigation tool, focus groups can be used with people already interested or knowledgeable on a topic, as a means of quickly generating valuable and insightful information. So you could use them for:

Focus groups have the potential to generate incredibly rich information, insight and creativity. Innovative ideas and insights start to bounce between participants as the dynamics get to work in this kind of group environment.

Working in groups provides a means by which people can pool their knowledge and insight and produce outcomes that are beyond what the individuals can achieve on their own; for example, making better decisions. This is an example of the concept of synergy: the effect of the group as a whole is greater than the sum of its parts (i.e. individuals working separately). People interacting with one another can generate higher levels of creativity, intellectual capability and energy, [a type of] group intelligence.

However, the potential for using focus group methods as a way to deliberately to tap into collective creativity is overlooked. Focus groups can designed specifically to brainstorm ideas for campaign messages and approaches and also applied as a tool for creative problem-solving and generating new ideas and approaches.  Using focus groups in this way is similar to Action Research where the research is directed toward action and change rather than understanding. This novel approach to focus group methodology is too often overlooked and so unfortunately it is very much an undertilised option.

Focus group methods can, and so should be, more widely considered as a research tool for capitalising on potential for synergetic creativity to generate ideas and produce solutions – rather than just remain limited to gathering conventional qualitative insight and information.