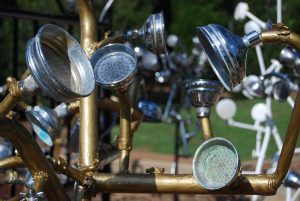 Detail of Mary-Kate Khoo’s Bed of Roses from Avant Garden 2007.

Research by our own Andrew Mason and Dr Rebecca Scollen shows that it pays to take a risk by adding innovative fringe events to mainstream festivals to increase engagement and involvement amongst local residents.

Their study of the community’s involvement in the quirky ‘Avant Garden’, part of the mainstream Carnival of Flowers in Toowoomba, Queensland, has shown that innovative ideas at mainstream festivals can deepen community engagement and widen appeal of the main event. This deeper engagement has implications for place-making and perceptions of identity by residents.

Avant Garden was held from 2007 to 2010, when the southern Queensland region, and the Carnival of Flowers, was suffering from the effects of a 10-year drought.

Andrew and Rebecca aimed to investigate the role of a grassroots initiative in engaging local people in an innovative place-making fringe festival to determine if such fringe events could contribute to place-making through marketing and engagement. They found that:

The important takeaway for regional event managers of this paper is that innovative grass-roots initiatives like Avant Garden can provide authentic, and therefore more effective, methods to get more of the community involved in their local festival, and involved in a deeper way.

The bottom-up approach used by Avant Garden organisers was shown to strengthen the links between place and identity for local people attending the event.  Respondents described Avant Garden as ‘quirky’, a good way of showcasing local talent, and a good way to bolster the drought-affected Carnival of Flowers. Andrew and Rebecca found that Avant Garden provided a connection to local public parks for some people who had come to the Carnival specifically this part of the festival, many of them first time Carnival of Flowers attendees.

The research supports the effect of community-generated innovation in regional events, and along with that innovation, some risk taking.

Andrew and Rebecca used observation and a survey of 504 people (13% of total visitors and three quarters of them local people) to come up with their conclusions.  Their paper has been published in the Journal of Place Management and Development.

We’re at the tail end of the disaster season in Australia, with the Queensland bushfire season extended 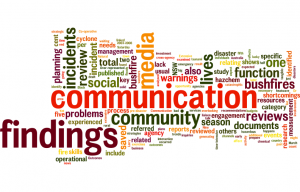 by four months past its usual end, Victoria and NSW working fire business as usual and cyclone watchers waiting for the big one, which could still happen in the next few weeks.

More than ever, community involvement in disaster management is necessary.

Yet my new research shows that more than one fifth of the problems experienced during disasters in this country related to shortcomings in communication with the community. Despite this, less than one per cent of most agency operational budgets are allocated to the communication and community engagement functions.

This one per cent has certainly saved lives already this season – the February heatwave saw catastrophic bushfires in NSW with the town of Uarbry burnt to the ground and others experiencing extensive damage – but no lives lost.

But we won’t always be this lucky.  So where is it going wrong?

I reviewed 22 reviews, inquiries and debriefing documents of events and exercises that occurred between 2009 and 2016, including the Black Saturday bushfires.  The documents covered bushfires (17), floods (3) and hazardous chemical incidents (2).

I analysed 672 recommendations and findings from these reports and found that 20.4%, or 137, concerned community communication shortcomings during the incident.  I did not include agency or cross-agency communication in this count.

Top of the list was education and pre-disaster engagement, which reflects the bushfire focus of the documents I reviewed.  They made up 39 of the 137 findings.

This also happens to be the most time consuming function of communication teams, and lack of resources will affect this activity the most. Extensive Bushfire and Natural Hazards Co-operative Research Centre research shows exactly what needs to be done and what dialogue needs to be established to prepare communities and individuals for bushfire, cyclone, tsunami, earthquake and flooding.   We have the opportunity to be effective in this area with just a small amount of additional investment on what currently occurs. Benefits of doing this are tangible.

Next culprit was communication planning, which included strategic planning for incidents where communication had been overlooked – 21 (or 15.3%) of the findings dealt with this.  This is another time-intensive function, but it has no tangible result – it can’t be linked to the outcomes in a specific incident, and only measurement of trends over years can provide solid proof of its effect.

Warnings attracted 20 findings (14.6% of the total), which was most concerning, because the warnings phase of response is where most lives are saved.   Over-represented in the warnings findings were hazchem incidents, with two incidents examined generating five of the 20 findings relating to warnings.  Reading further into the review of each incident, this seemed to be a result of hazchem events falling outside the experience and operational guidelines of metro and rural fire services.  In some incidents, warnings were received  by unofficial means before the official version arrived.

Interaction with the media was also problematic, with 17 findings (12.4%).  These included delays in moving media materials through head office for sign off in fast moving incidents, where any delay can see a media release or information points out of date before it is released; the importance of having media in state operation centres to speed up broadcast of critical information; and consistency of facts given across all media.

Resourcing of the communication function was specifically identified in five findings (3.6%), but also fingered as a contributor to findings relating to lack of communication engagement plans, overlooking specific communication channels (such as social media), media liaison skills, media planning, and messaging skills.

In the 2010 study, half of the 12 reviews considered did not include community feedback in the review process.  Of the 22 reviews studied here, 77% used this technique to identify problems for the review process.  With communication being the key link between operations and the community, it would be expected that more findings relating to this aspect of emergency management might emerge.

Overall, communication is a critical component of emergency management that seems not to have the higher level commitment that it should – after all, appointing a new communicator or funding a preparedness campaign is not as tangible or promotable as a new fire truck.