Social media has officially become the dominant source of news for Australians aged 32 and younger, and it’s not via click throughs to online news sites or news aggregators. This has implications for PR professionals, and will 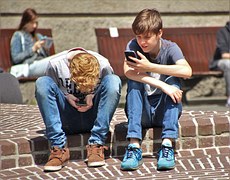 However, while Facebook was the clear winner in the social media scene, Trailing Millennials are not as enamoured of it as  the other age groups – 88% of this group are on Facebook compared with 92% overall. Trailing Millennials have other preferred options: Instagram (56%) and Snapchat (47%). They are the trailblazers here – overall, just 28% of social media users accessed Instagram and 18% Snapchat.

The surprise was the Matures (aged 69+) – just 37% were not using social media at all. Of the social media users in this group, 36% checked daily. After Facebook (which hosts 93% of those Matures on social media), Matures were the biggest users of Google +, with 24% using this platform.

Just one quarter of Boomers (aged 50-68) were not on social media. The social media users in this group were mainly on Facebook – at 96% the biggest proportion of any age group.

Crucially, the researchers discovered that social media is moving from a social platform to a place to be entertained and connect with products, brands, news and other media.

This has coincided with a perception by social media users that organisations are finally ‘getting social media’ – what Deloittes called a shift from being ‘on’ social media to ‘being’ social, using more connective language, style and format.

Good news for PRs, no matter what demographic your target publics are. The need to supply bloggers and other sources of content will offset any reduction in the number of news releases we write!

The full report is a must-read for any Australian PR, marketer or advertiser.

Barbara Ryan teaches post-grad level PR writing and crisis communications, and practiced in-house and PR consulting for 15 years before joining USQ. She was a print journalist before Google.